Thank you to everyone who joined us at the Old Red Lion on Monday 20th May for our sold out show! 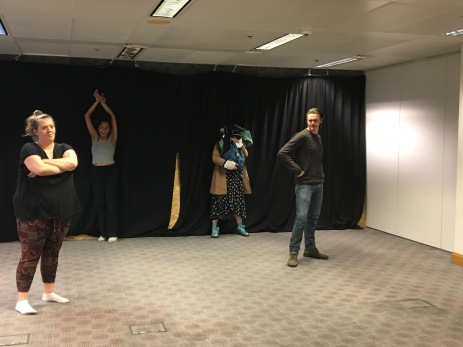 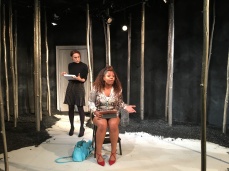 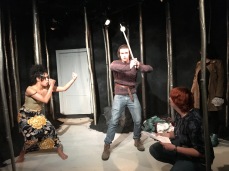 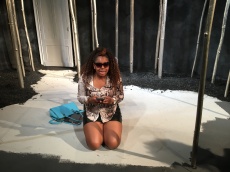 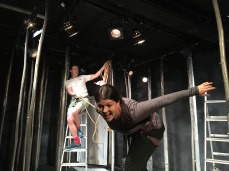 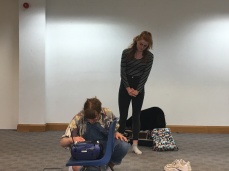 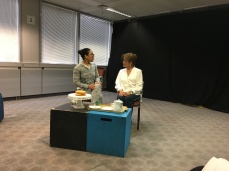 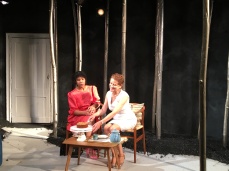 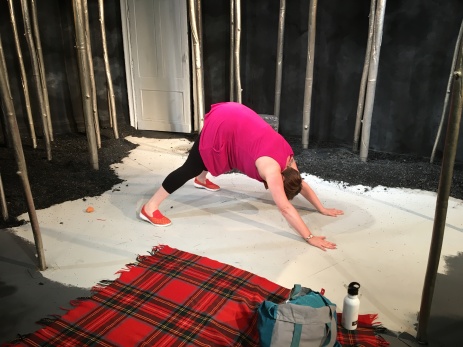 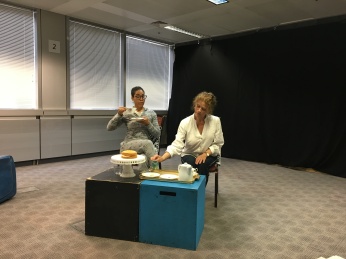 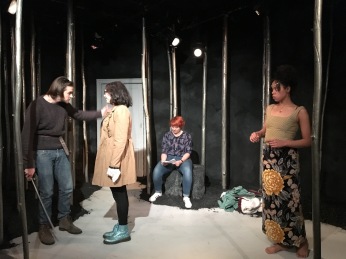 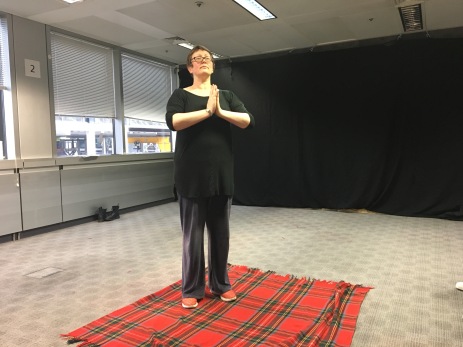 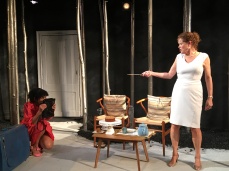 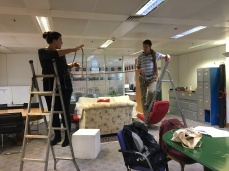 On Monday 20th May, six short plays explored what ‘endings’ can mean.

Visitors
A daughter is shocked at her mother’s revelations…

Sound for the evening designed by Seisha Butler.

Between them, the writers of ‘This Is The End’ have been broadcast on LBC, BBC and Radio 4, developed an immersive historical drama for the government of Azerbaijan, had work on at Southwark Playhouse, Theatre N16 and Perdu Theatre in Amsterdam and been shown at scratch nights all over London.

Lara Barbier enjoys working across TV, VR, theatre and video games. She is currently developing an original TV Pilot Keeper of the Pleas with an independent producer and her original TV series “The Book of Watchers” placed as a Quarter Finalist in the 2018 WeScreenplay TV Pilot Competition. Lara’s latest commissions include writing an immersive historical-drama about the development of the Silk Road in Baku, Azerbaijan, and a VR experience set in Georgian-era Buxton. She has had several short plays produced at new writing nights and is a member of the Directors Cut Theatre Writers Club. Lara has just been selected for the 2019 Residency at London College of Communication, UAL where she will be exploring storytelling and VR. She is represented by The Agency.

Grace Carroll is a writer based and brought up in London. She likes to write stories about women and the complexities of female relationships. Grace has had work performed at Bunker Theatre, E & C Writers night, Stitchin’ Fiction, Leytonstone Itch and “Herstory: Feminist Theatre Festival” at Theatre N16. Her short play Swipe was selected for the Little Pieces of Gold showcase and Grace’s full length play Wet had a five-night run at Theatre N16 and Perdu Theatre Amsterdam. Most recently her short play Drag Baby was chosen for ‘Xposed’ a night of LGBT short plays and performed at Southwark Playhouse.

Stevie Cooke writes jokes and sketches for Have I Got News For You and Sketchtopia. Stevie was a finalist in the 2017 Funny Women Writing Award and the 2017 Funny Women Shorts Award and in 2018 was long-listed for the BBC Comedy Writersroom and a finalist in the BBC Comedy Monologue competition. Her short film about UK abortion law disparity has just been optioned and she is attached to direct with production scheduled for Summer 2019.

Victoria Morris’s debut radio play was produced and broadcast on LBC which starred Polly James and was directed by Richard Shannon. She is currently a finalist in the Stage 32 TV screenplay competition and semi-finalist in the ScreenCraft Family feature competition (both ongoing). Her short comedy film script was an official selection at the Oregon Short Film Awards festival this year. She has also been placed in numerous screenplay competitions including the Academy Nicholls Fellowship, The Sitcom Trials, The Old Vic Writer’s Programme, the BBC call out and Fresh Voices.

Seyi Odusanya born and raised in London. A semifinalist in the 2016 BBC Comedy Writers Room his first broadcast credit was for an episode of CBeebies comedy-drama Molly and Mack. He is currently developing a number of animated programmes for BBC Children and writes for Youtube channel Wildbrain. Seyi was a quarter-finalist in ScreenCraft’s Family Feature Screenplay competition. His stage work includes numerous pieces for E&C Writers.

Megan Toogood has been shortlisted in various competitions including BBC Writer’s Room drama window, T.S Eliot Prize at the Old Vic, the Crime Writer’s Association Debut Dagger award and the Launchpad novel manuscript competition. Her full-length play Frost Fever Flood is in development with the support of Theatre 503.

Tess Agus: Tess is an Israeli-born freelance director and theatre-maker and recent graduate of the MA in Directing at the Guildford School of Acting. She has recently performed in Sue MacLaine’s ‘Vessel’ at The Battersea Arts Centre and is the co-founder of theatre company ‘Bee in my Beanie’.

Rachel Bellis: Rachael Bellis trained at NYU’s Tisch School of the Arts before moving to London and starting Aequitas Theatre Company. She performed in several of their shows before moving into directing, where she hit the ground running with her debut: Brecht’s Fear and Misery of the Third Reich at the Jack Studio Theatre. She has directed several projects since, most notably Antigone (Bread and Roses) and Acts of Disunion (White Bear Theatre), along with scratches and short performances. Rachael is also a performer and singer, and is a member of Improvised A Capella Musical: Acaprov.

Rachel Mervis: Trained at East 15 Acting school on the BA (Hons) in World Performance and is the Co-Founder and resident director of HiddenViewz Production Company. She has worked with the BAME networks of business such as Linklaters firm and UBS bank in creating theatre for corporate events. Directing credits: Face to Face (The Water Rats Theatre, Rialto Theatre, Etcetera Theatre.). Under The Mental Health Act (The Cockpit Theatre). CRACK/ed (The Blue Elephant Theatre, Theatre N16, Black Market, Room 2, Surgeons Hall) A Line (The Bread and Rose Theatre). My Brothers Drug (Trinity Church Hall, Bar Bados- Room 6, Edinburgh Fringe) The Land of the Free (Southwark Playhouse).

Jessica Phillips: Jessica is a factual TV producer and director as well as a development producer for Douglas Road Productions at Endemol Shine. She has been directing TV for all of the major broadcasters for the past 5 years and this is her drama and theatrical debut. Jessica studied Modern History and the History of Art many years ago before embarking on a career as a reporter that transitioned into a career in television. However, with actor/director/writer parents, she grew up backstage in London’s theatre scene and is excited to be delving into the world of drama.

Katherine Sturt-Scobie: Katherine is a freelance Director and Puppet maker. She has worked with Actors of Dionysus as Assistant Director, in Costume design at Wycombe Abbey School and in an administrative role at Clean Break Theatre Company. She holds a BSc in Psychology from Lancaster University and an MA in Directing from Guildford School of Acting where she received the Max Adrian award for her dissertation on rituals in puppetry. Having grown up in over 3 countries, Katherine is driven by the power of storytelling to bring people together.

Seisha Butler: Seisha Butler is an actor-musician and plays the part of Waitress in Land Of the Free as well as being Musical Director for tonight’s performance. She is a founder member of In Yer Face Productions and graduated East15 Acting School with a 1st in 2018. She has written, published and directed her own play Jupiter, produced and released a single; Inadequate and is a keen composer and video editor; writing and mixing music and footage for amateur shows and short films.

Wuese Houston-Jibo: Born in Dublin to an Irish schoolteacher mother and a  Nigerian father, at six weeks of age Wuese Houston–Jibo returned to her family in Nigeria and spent her first three years there whilst frequently shuttling between Dublin and London.  Her father was the Minister for Education under the administration of Aper Aku, resigning under conscientious protest and shortly ahead of a military coup.  Due to political unrest, Ms Houston–Jibo, her mother and siblings left Nigeria for London in the early 1980s. Ms Houston–Jibo attended a convent school, an avid reader from an early age she excelled at English and Drama and was a natural storyteller, however formal education proved too constraining and she left school at sixteen. She spent five years working as a Croupier in Mayfair Casinos and DJing in London Hip-Hop clubs alongside the likes of Doc Brown (AKA Ben Smith) and Professor Green.  Having stoked her inherent creativity and a love of all art forms, seeded by her mother, Ms Houston–Jibo returned to formal education studying at The London College of Fashion on a course that encompassed make-up design/cultural studies/fine art and photography. After a number of years working in production and as a result of her unique experience as a croupier, Ms Houston–Jibo was offered a part on an internationally syndicated game show directed by the renowned Paul Kirrage.  This experience reignited a long held vocation to act and thus she immersed herself in studying Sanford Meisner technique at The Actors’ Temple and with Tom Radcliffe of The London Group Theatre, both of which are recognised and endorsed by the Meisner foundation.  Ms Houston–Jibo has also studied with Martin Barter of the Meisner Centre, Los Angeles and undertook a year of classical theatre training, encompassing voice, movement and stagecraft at Identity Drama School. Ms Houston–Jibo has appeared in film and TV productions including ‘Game of Thrones’ – HBO and ‘Catastrophe’ – Channel 4.   She made her Directorial debut with a short film ‘Happily Ever After’ which she both wrote and acted in.  She has followed this with a gangland adaptation of Macbeth ‘We Fly by Night’ which was put on as part of Camden Fringe and is currently writing and developing projects for the stage and screen.